I had the pleasure of writing a guest post for Writers Digest called I Didn’t Plan To Write A Book, detailing how I started with the idea of creating sketchbooks as a way of coping with my cancer. These sketchbooks or scrapbooks, eventually became Not In The Pink. Here’s the process of evolving scrapbooks to a published book.

This post is probably over due and I have been remiss in not letting people know what is happening. Here is the short version: I have been diagnosed again with breast cancer. The longer version of how I feel is below…

This seems to be a theme over the last few days in a lot of my conversations. It started when my close friend was rear ended at a red light and she asked me “Why do these things keep happening? What am I doing?”

I have asked myself this a lot lately. Mainly because I have been diagnosed with cancer…again. And the burning question in my mind is just that: what did I do? Could I have been kinder, gentler, petted more puppies, bought more people coffee in line at Starbucks and definitely not said “fuck” so often…on that basis alone I should have a lifetime of not great. I did forget to mention the seven times I had a drink last year. Note the emphasis on “a”.

Maybe, just maybe, the reality is that none of us did anything. The dumb woman behind my friend was texting while she was driving. Maybe the only lesson here is that people should not be distracted while they are in a moving vehicle that weighs several thousand pounds. Because when they do they run into other people. Wake up. You are not the only person in the universe.

During my first cancer diagnosis a woman I know kindly took my arm and with a great deal of concern in her voice informed me “the universe was trying to teach me a lesson”. My prairie upbringing – rat shooting, can fillet a fish, pitch a tent small town roots showed through my thin veneer of urbanity and I almost decked her and said “There, now the universe has taught you a lesson – don’t be a bitch.” What stopped me was the echo of my mother’s voice. She always believed in the high road. Oddly she had cancer as well…

I am not advocating that you do whatever you want because there are no consequences and it doesn’t matter. You can’t get behind the wheel of a vehicle drunk. You can’t text while you are driving, …but convincing yourself that all of your choices are leading to your current state is starting to make my blood boil. I didn’t choose to have a cancer. Not the first time. Not this time. I am fairly certain that none of the people I know who are behind this particular eight ball made that choice either. BTW – I don’t really know what that means. Is the eight ball harder than all of the other balls and you don’t want to get hit by it? Obviously I don’t play pool. Should I add that to the list of things I haven’t done that have currently caused my predicament?

The only thing I know for certain is for my friend and me – madness lies in trying to figure out what we have done.  So I offer just a small opinion:

I’m delighted to be exhibiting at the Michelangelo Gallery of Fine Art & Framing in Calgary from Nov 12 to Nov 30. 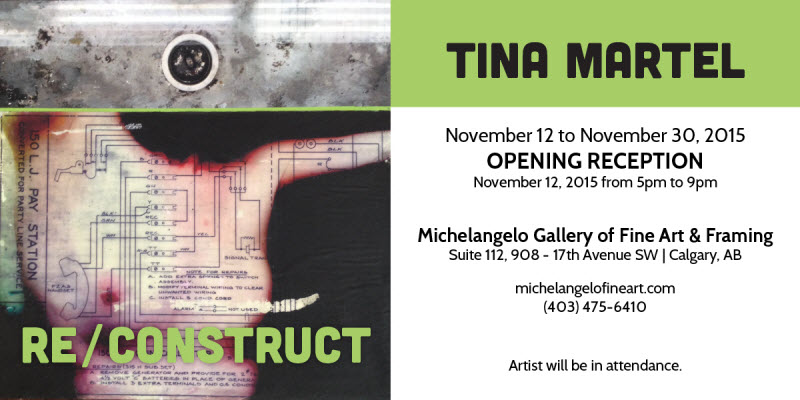 I’m also hosting an artist talk followed by a book signing for Not in the Pink on Saturday Nov 14. 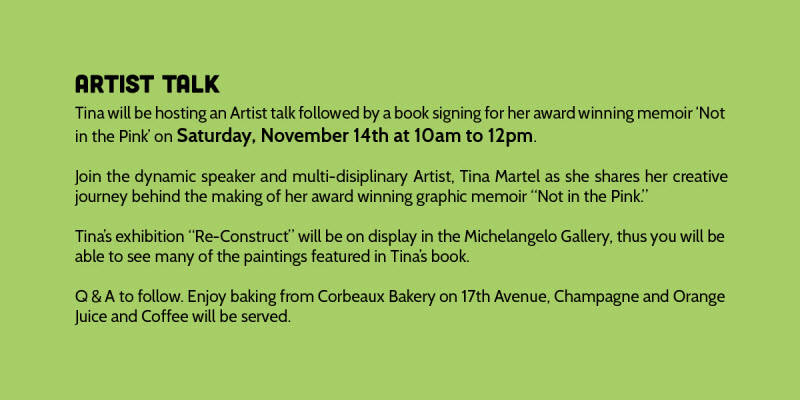 I’m so thrilled to announce that Not In The Pink won two firsts (for Memoir and Illustrations) and a second place (Health) at the CIPA EVVY Book Awards Sunday night. Here’s the official press release:

Not In The Pink Awarded 3 CIPA EVVY Book Awards

Grand Prairie, Alberta – August 25, 2015 –Visual artist/author Tina Martel is delighted to announce that Not In the Pink, her very atypical cancer memoir, has won 3 awards at the CIPA EVVY Book Awards in Denver, Colorado.

The Colorado Independent Publishers Association awarded Not In the Pink two 1st Place awards in the Memoir and Illustrations categories and a 2nd place in the Health category. This is Martel’s first book. “I’m over the moon,” she said of the award. “This was such a personal project for me. I’m really thrilled by the positive response to Not In The Pink.”

When artist Martel was diagnosed with Stage Two B breast cancer, she decided to document everything though her art. During her treatment she created a stream of sketchbooks, photographs, paintings and video, in response to and frequently in spite of what was happening to her. Not in the Pink is a “graphic narrative” of the pain, frustration and frequent hilarity of her day-to-day dealing with the eccentricities and bureaucracy of the medical system. It is also a candid and moving exploration of the expectations often placed on you once you are diagnosed with cancer: by the people around you, by society and ultimately by yourself.

Not In the Pink was launched in conjunction with Martel’s art installation Not In The Pink: The Creative Process at the Art Gallery of Grand Prairie in Alberta. The Art Gallery is one of the largest public art galleries in Canada.

The CIPA EVVY Awards, now in its 26th year, was held on Sunday, August 23, 2015. The Colorado Independent Publishers Association (CIPA) is a nonprofit association of independent book publishers, authors, and related publishing service providers. CIPA was founded in Denver, CO in 1992.

Not In The Pink is available through the author’s website, notinthepink.ca and amazon.com.

My guest post on Not In The Pink was featured yesterday on Cecile Sune’s blog Book Obsessed:

I am a visual artist who accidently wrote a book. I never meant to write one. It just happened. I was diagnosed with Stage Two B Breast Cancer in 2011. My entire life changed in a heartbeat. 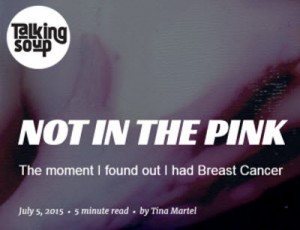 Not in The Pink was featured this week on Talking Soup, a platform for immersive first person storytelling offering unique perspectives on modern life. Check it out:

I was interviewed last week on Blog Talk Radio by Dr. Jeanette Gallagher of Out Of The Box Healthcare. The name of the interview is Breast Cancer Journey as a Graphic Narrative.

Breast cancer is not easy, simple or just like everyone else’s experience.  It is unique, it touches every cell in your body and screams with all your emotions to pay attention and be present.  Why are we making such light of this process as the numbers of women who have gone through the disease say, ‘oh, I did that, you’ll do fine’. Have we minimalized the pain, suffereing, medical interventions, loss of self and damage to the physical and spiritual body?  Why is this becoming so ordinary?

Listen to the interview here.

I was delighted to write a guest post, Cancer and my Search for Enlightenment for Jean Campbell’s blog, No Boobs About It. Do you think we put too much pressure on ourselves to be better than we are? Do we have to battle cancer and be enlightened at the same time?

I look forward to your comments!

I didn’t intend to read Not in the Pink in one sitting, but I just couldn’t help myself. I didn’t intend to re-read Not in the Pink in another one-day sitting, but, again I couldn’t help myself. Let me be perfectly clear, I first read it in one evening because I was riveted to every word that Tina Martel wrote. The second reading was to revisit with the graphics, because I didn’t want to miss a single image or thought.

Tina Martel was diagnosed with Stage Two B breast cancer. Not in the Pinkchronicles her journey in word and in graphic artwork of various mediums. Her story is compelling. It is raw and it is real. Likewise, her artwork and photography is raw, real and very gutsy. More

Sherri Rosen Publicity in New York is working with me in gaining some attention for my  illustrated book Not in the Pink. This is her press release. Very excited to be working with her.